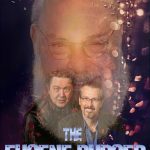 It didn’t start out as this.

Names not known to many, but hugely influential and famous in the world of magicians, are touring the UK this April through May. I’ve been involved with the Mystery School founders (based in Las Vegas) for around 15 years and have, of late, been producing their tours this side of the Pond.

In 2016 we organised a tour for April 2018 to feature the World Ambassador of Magic Jeff McBride (world record holder, Las Vegas headliner), Eugene Burger (the world’s authority on magic and philosophy) and Lawrence Hass (critical thinker and leading magic academic and performance artist). Alas, it wasn’t meant to be. Our dear friend Eugene passed away in August 2017. I was honoured to be asked by the leading magic industry magazine to write a tribute.

Both Jeff, Lawrence and I were keen to keep Eugene’s spirit alive and so the forthcoming tour is all about Eugene’s magic, philosophy and teachings. Most events are full, with a few seats remaining at the show in Bath.

The tour dates are:

Event details in the magic press. As a kid I watched these magician’s on TV and now I am touring with them. Funny world.

After our inaugural Magical Workshop in November 2017, I decided to re-design the magic sets and tricks taught in this hands-on class for special needs students. After successfully doing so, and about to perform a back-up, my computer (the ever-customer-ignoring-Apple-brand) decided to crash. Oh, that was after dear Apple said I really, really should update my OS as my computer would otherwise be ‘vulnerable’. I updated. And… well, if you’re bored Google ‘Too Many Corpses’ as this was the fault I found out hours later.

The good news is that;

1 – the magic sets were completely re-designed again (they had failed to save upon the crash) meaning I could add an extra tweak or two before committing to print.

2 – my Mac is working, and I have decided from this day forth to not buy from Apple ever again.

3 – my magician friend Tim and I successfully delivered another Magical Workshop week to around 250+ students across many schools in Hertfordshire and Essex.

For the creatives among you, a hidden lesson was the opportunity presented from the above crash (I’ve recommended Apple change their name going forward to ‘hAssLE’) allowing me to re-design my re-design.

Often our first efforts are not quite as good as they could perhaps be, given we are ourselves unfamiliar with the work we’ve just created. When we have the chance to create it again, we are now doing so from a vision of knowing what the final result will look like, and this allows us to tweak and play until it is perhaps more how we feel it should be.

So is our second best actually the opportunity for our best?

JFortune March 8, 2018 Blog Comments Off on The computer crash