Online store selling my original pencil and ink portraiture is now all-systems-go-baby. Please check out (literally, with an original in your shopping cart and support a starving artist!) my online shop here. Thanks!

And, as I mention on the store front, if you buy an original from me then you can show it off with pride as you actually own an original piece of art, unlike your friends who will also claim to have ‘fine art’ on display, usually purchased from The Range. Tut tut. 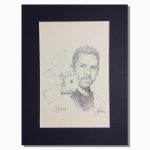 It started as a bit of fun to get me back in the swing of doing sketching after a hiatus. The response from my fellow Magi has been most kind and after many requests for prints of my portraits of famous magicians, I’ve decided to make a few originals for sale in the coming days. They will be on a first come, first served basis and available from this here website of loveliness.

The selected works, and new portraits, will be added periodically with the initial shop launch sometime this month.

Each piece of original art will be framed within its own mount and come with a Certificate of Authenticity. And be reasonably priced of course!

Keep an eye out on my social media for details of when the shop will go live via Instagram and Facebook.

The curious incident of the curb-stone at the convention

Having been asked to write a tribute to my dearly departed friend and mentor Eugene Burger (THE philosopher of magic), I’m indebted to Magicseen Magazine for their kind permission to attach it here.

‘Weston-Super-Mare council weren’t to know. How could they? The pavement curb stone outside of the Playhouse Theatre was just another everyday mundane slab of concrete.

The gala show at the Bristol Day of Magic was enjoyable and the conventioneers had gathered on the pavement outside to bid farewell for another year. Like most conventions being a social occasion interspersed with the occasional packet trick and pint.

I was unexpectedly shoved from behind, with a growling voice apologising profusely. I turned to steady the attacker from further onslaught and came face-to-face with a living legend. He had tripped on the curb without being intoxicated (unusual for the inhabitants of Weston) and steadied himself on my wire-like frame.

And that was how I met the man who would go on to become one of my dearest friends, mentor and adopted granddad; Eugene Burger.’ [To read the rest, please click the link below]